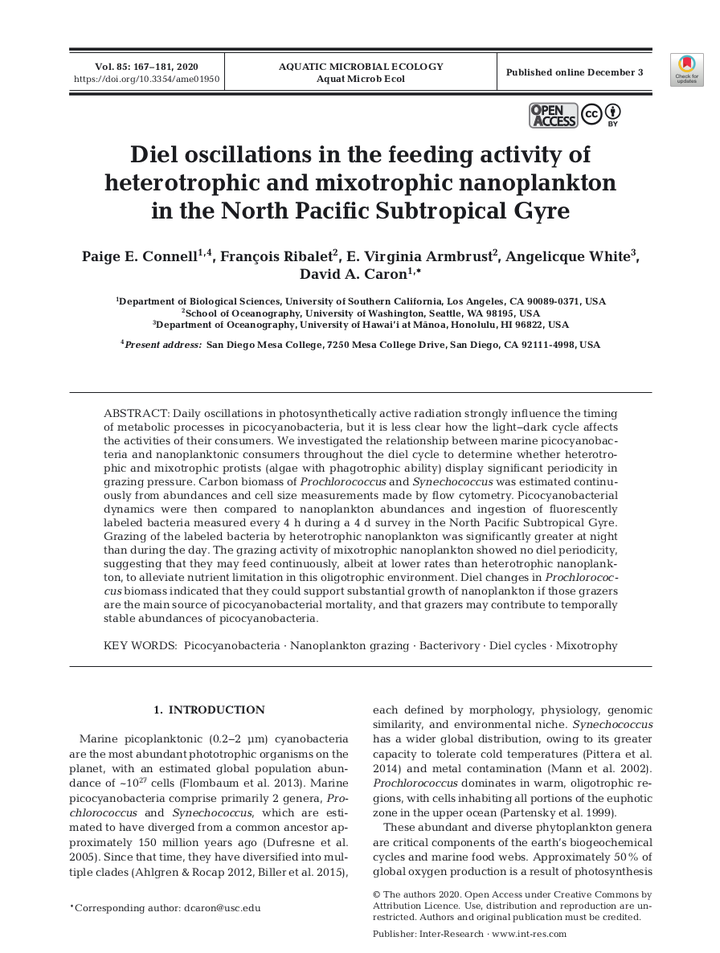 Daily oscillations in photosynthetically active radiation strongly influence the timing of metabolic processes in picocyanobacteria, but it is less clear how the light-dark cycle affects the activities of their consumers. We investigated the relationship between marine picocyanobacteria and nanoplanktonic consumers throughout the diel cycle to determine whether heterotrophic and mixotrophic protists (algae with phagotrophic ability) display significant periodicity in grazing pressure. Carbon biomass of and was estimated continuously from abundances and cell size measurements made by flow cytometry. Picocyanobacterial dynamics were then compared to nanoplankton abundances and ingestion of fluorescently labeled bacteria measured every 4 h during a 4 d survey in the North Pacific Subtropical Gyre. Grazing of the labeled bacteria by heterotrophic nanoplankton was significantly greater at night than during the day. The grazing activity of mixotrophic nanoplankton showed no diel periodicity, suggesting that they may feed continuously, albeit at lower rates than heterotrophic nanoplankton, to alleviate nutrient limitation in this oligotrophic environment. Diel changes in biomass indicated that they could support substantial growth of nanoplankton if those grazers are the main source of picocyanobacterial mortality, and that grazers may contribute to temporally stable abundances of picocyanobacteria.